Hello guys! Another day, another book review. Today, it’s an ARC I recieved from Netgalley called Crowns of Croswald. Guys seriously, you HAVE to check it out.

Title: The Crowns of Croswald 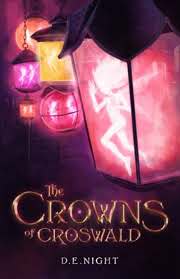 Synopsis:  In Croswald, the only thing more powerful than dark magic is one secret…

For sixteen years Ivy Lovely has been hidden behind an enchanted boundary that separates the mundane from the magical. When Ivy crosses the border, her powers awaken. Curiosity leads her crashing through a series of adventures at the Halls of Ivy, a school where students learn to master their magical blood and the power of Croswald’s mysterious gems.

When Ivy’s magic and her life is threatened by the Dark Queen, she scrambles to unearth her history and save Croswald before the truth is swept away forever.

This book is a lot like harry potter, and its fantasy elements made it more intriguing for me. Though lots of fantasy novels these days are compared to Harry Potter, this one is very similar. The structure has the makings of a JK Rowling mystical novel. At a point, I was actually imagining Harry, scurrying around the library with Ivy and her friends uncovering secrets. But of course, there are lots of differences, including the fictional world. Here we encounter new fictional elements from the students, new creatures like we have never seen before – Hairies, Creatures that emit lights, Shorehorse and many more. New stuff, which I found rather fascinating.

Ivy’s character is crucial to the development of the book. She is shown as a naïve young girl, who transforms from a maid to a student of magic in a magnificent institute. So much like Cinderella, here. There’s also the wicked evil queen – (Snow White, everyone?) The magical world in itself is so new – we see students with different magical abilities, some trying to find their abilities and some already in control. Ivy is smart, noticing some weird stuff the moment she sets foot in to the institute. Also, she immediately correlates her dream to the library in the school which is exactly the same. I think the book has some elements of lord of the rings too – the dwarf that is practically Ivy’s only friend before she arrives at the institute. The characters are well developed, the plot coherent. Ivy’s new friends help her in a lot of ways, covering for her at times, and going together with her to forbidden places. Her friends are also quite sassy, and strong, helping some of the other students to fight against the bullies. It also addresses many issues that teenagers are facing including bullying, prejudice. I love Ivy’s determination in fighting the evil queen whom everyone is scared of. The ending shows a lot of possibilities – what would happen next? Will the Evil Queen come back? Which mission will be next for Ivy?

The book is the first in a series of fantasy series. The subsequent novels have not been released, and I’m excited to read them once they’re out! If you love Fantasy, or miss Harry Potter, or just want to delve into a magical realm, then this book is for you. 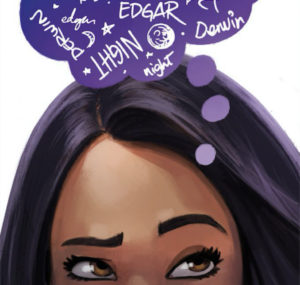 D.E. Night lives, dreams, and writes in South Florida amid her menagerie—two dogs, two cats—with her family. The Words of the Wandering is the third book in the Crowns of Croswald series. She draws inspiration from silver-screen storytellers, magical imaginings, and her son Jake. A day spent in Croswald, or another whimsical world, is her favorite kind of day.

Pray | Trust | Wait | Be Happy View all posts by Masha